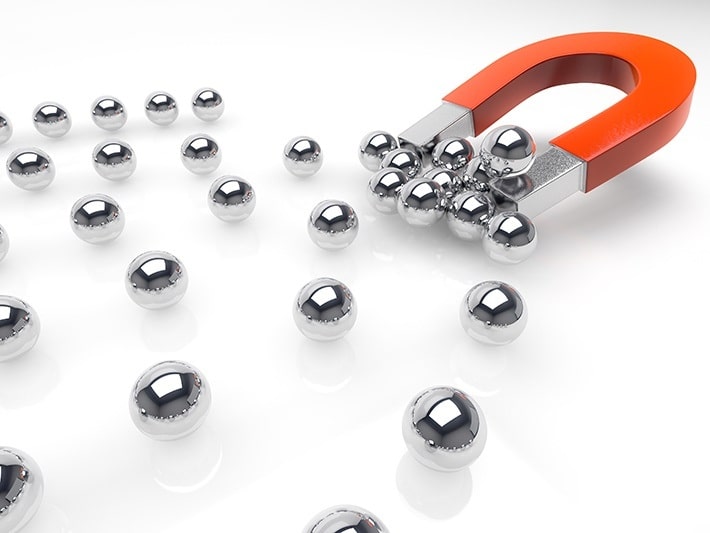 Lots of leaders think they are magnetic, when in fact they are anything but. Here are seven traits that are common among magnetic leaders, as well as examples of people who personify (or personified) these qualities. I’m sure you can think of a dozen more traits that would fit into this category.

1.    Authenticity.  Magnetic leaders are authentic leaders. They don’t try to be someone else, nor do they change who they are based on office politics. They are true to themselves and are honest in their dealings with others. They are not afraid to share their mistakes or shortcomings. Warren Buffet is a great example of a leader who speaks openly about his $200 billion mistake buying Berkshire Hathaway.

2.    Selflessness. Nelson Mandela immediately comes to mind when I think about inspirational leaders who are selfless. Leadership is a service business and service comes with sacrifice. Mandela made many sacrifices so others could advance, including giving up power. When elected president of South Africa, he refused to serve more than one term because he believed that a swift transfer of his authority was in the best interest of post-apartheid South Africa.

3.    Strong communication. Magnetic leaders communicate frequently and clearly. They speak their minds, even if it makes them unpopular. When they are forthright with their opinions, such people often become even more magnetic.

Pope Francis is a great example of an outspoken leader with strong communication skills. His popularity has risen tenfold as have donations to the church. People around the world are embracing Pope Francis. He doesn’t toe the party line. He says what’s on his mind, which is refreshing.

4.    Charisma. Magnetic leaders have a charm that inspires devotion. No matter where people fall on the political spectrum, most would agree that former President Bill Clinton possesses great charisma.

5.    Transparency. Leaders who are transparent are consistently honest and open in their communication — so much so that people never have to guess what these leaders really mean when they say something. This level of openness often spreads to the wider company culture. Tony Hsieh, CEO of Zappos, is the first person who comes to mind when I think of transparent leaders. From the very beginning, before blogs became all the rage, Hsieh would openly share the happenings (both the good and the bad) at Zappos for both employees and customers to see. In fact, the company’s all-staff meetings were broadcast on the Internet.

6.    Vision. Vision and magnetism go hand in hand. Visionary leaders, like the late Steve Jobs, are the dreamers who make us realize that anything is possible. They have a vivid imagination that inspires others to get on board and come along for the ride.

7.    Resilience. Magnetic leaders understand that there will be times when things won’t go according to plan. You simply must keep charging ahead, often course-correcting as you go. No one knows this better than GM chair and CEO Mary Barra, who had an incredibly stressful first year in office. She faced revelations about faulty ignition switches, a 30-million car recall, and pressure from investors to return more cash to shareholders. Two years into her tenure, GM’s financial health has rarely been stronger.

As you can see from this list, magnetism isn’t something you are either born with or not. It’s a state of leadership that evolves over time.

The key word here is evolves, as most of the magnetic leaders I’ve interviewed were like many of you when they first started out. They wanted to be good leaders and were willing to put in the work needed to reach that goal. They observed other leaders. Some, they emulated; others, they promised they would not be like. They learned by doing and made course corrections along the way. Many were fortunate enough to have a mentor who gave them honest feedback. Others hired coaches at different times in their careers.

All of these leaders invested in their own development, and they continue to work on improving themselves every day. They do so because they understand the power of magnetism and how it can be a game changer when it comes to attracting employees, customers, and profits.

Read more: How to Attract Magnetic Leaders to Your Organization

Author Bio:
Roberta Matuson, president of Matuson Consulting, has helped leaders in Fortune 500 companies, including General Motors, New Balance, The Boston Beer Company, and small to medium-sized businesses achieve dramatic growth and market leadership through the maximization of talent. She is known globally as “The Talent Maximizer®” and for her boldness and ability to take on tough challenges that most people shy away from.

She is the author of Suddenly In Charge: Managing Up, Managing Down, Succeeding All Around (Nicholas Brealey, 2011), which was a Washington Post Top 5 Business Book For Leaders, and Talent Magnetism (Nicholas Brealey, 2013). She is also an expert blogger for Forbes and a former monthly columnist for The Boston Business Journal.