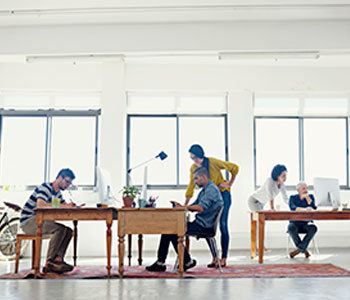 Given the depth and magnitude of the current economic recession, it’d be easy to assume that today’s recruiting environment favors the employer. Nothing could be further from the truth, says David Russo, author of 17 Rules Successful Companies Use to Attract and Keep Top Talent (FT Press.)

Russo sees a “perfect storm” brewing between workers and employers, one that has been cultivated by a lack of honesty. The reality is that today’s most talented workers are more independent than ever before and willing to push back when push comes to shove. It’s these workers, and their level of employee loyality, that will impact the future success of companies, particularly as the economy starts to recover.

Monster: In your book, you say that despite the economic downturn, this is an employee market. How can that be?

David Russo: Many people say that idea is ridiculous. Of course, many people who have and who will lose jobs have been negatively affected by the recession. Yet people with tremendous abilities and talents are still in high demand. This group is larger than a cadre. And companies who deny that these folks have lots of choices are fooling themselves.

These choice employees are typically younger than boomers. In fact, they learned from their parents and grandparents that companies are not to be trusted to control their lives, whether it’s financially, socially or psychologically.

Keep in mind — the skillsets that used to be parsed by industry, market segments and education have blurred. Basic business skills enable people to be entrepreneurial, leaders and/or contributors. Of course, there are anomolies in specialized fields, like mathematics, science and medicine. But, by and large, skill sets are transferrable from one market and industry to another. That means great employees are not trapped or pigeon- holed — if they’re good, bright and educated — their skills allow them to move anywhere and everywhere.

The other part of this issue is that companies have decided — and even announced — that life-long employment is no longer achievable or desirable. What they say now is that that employees will be prepared for life-long employment. That means we have is the perfect storm for individuals who feel that it’s foolish to be loyal to one organization.

Monster: How do you see this dynamic playing out between employers and employees?

David Russo: I see it in large companies — politics and organization stratifications wear on a person’s ability to contribute. They find themselves limited to performing in a “restricted space.” When the latitude to be creative or to innovate, even in small and personal ways, is gone, employees often opt for smaller organizations where they can stretch and grow. And to free themselves from the binds of politically chargedinfrastructure, employees will often go into business for themselves.

I also see young contributors with lots to offer pushing back on leadership. They’re willing to say, “What have you done for me lately?” without fear of reprisal. They see push coming to shove, and no promise or prospects for the long term. So employees say, “Why not be prepared for the inevitable with eyes wide open?” Thus, loyalty to an organization is not relegated to business history.

This trend had been in place before the downturn. It started when the Gen X workforce began to mature, and remembered how their parents were treated under re-engineering and re-structuring, and looked around and said, “Is this all there is?”

In my generation as well as with Boomers, the feeling was that company was family. When we got our paychecks we were thankful for the opportunity and the shared loyalty. When today’s younger workers (those who deliver their part of the bargain to employers) get their paycheck, they say, “We’re even.”

Monster: What can employers do to change this dynamic and be more competitive in their hiring practices?

David Russo: Some companies know how to do this — Southwest Airlines, Johnson & Johnson and the Men’s Warehouse are great examples. These companies offer their employees a work environment that allows them to do exceptional work while acknowledging the company’s dependence on them to succeed.

They show recognition and respect for their people via the behavior of their managers. There’s no pecking order — the leadership is all qualitative. It gives people an opportunity to have high respect for their leaders — gained by listening and taking risks. It’s about leadership that delivers as a resource, not as an overseer, and is willing to act as a coalesceing agent to guide and encourage; and to create an environment for motivation.

Behaviors of employees are always somewhat self-centered. But when they want to deliver valuable contributions and help the company advance and compete, then everyone goes forward. AND this enlightened self-interest works for employee and employer alike.

Monster: You talk about creating a “preferred self environment” in the workplace as a means of generating innovation. How can companies that are pushed to the brink of survival find room for innovation?

David Russo: Some people presume that “preferred self” means putting individual behavior above the team. It’s not.

A “preferred self” is simply a person who has all of the shackles of politics and mistrust and self-preservation modes of behavior lifted from their shoulders so their skills can be focused and applied to achieving the outcomes necessary to propel both the project and company forward.

So many organizations fail to see that the noise that surrounds a worker’s ability to perform affects results, not just for the individual, but for the company. This is true for middle managers in particular. The parameters they’re often given are a millstone.

In the book, I say we’re holding middle managers to these tremendous pressures to produce results without allowing them to interact with employees in the ways tuned to generate those results. They’re required to be scorekeepers instead of coaches. Middle managers are the glue in larger companies.

David Russo: It’s almost humorous. Nothing we’re talking about is any great shakes. Organizations have to learn to tell the truth. Large companies lie to employees every day. Nothing is more insulting and disrespctful, particularly to smart people.

Remember — if you start treating employees as if they’re stupid, they’ll start acting stupid. They’ll act against your best interests. “Watch how I can take a 3-week project and make it last 3 months.” “Watch how I can act politically to cover myself — rather than collaborating with others.” “Treat me like I don’t count – and I promise you, I won’t count.”

The bottom line is that when this recession is over and the economic backsliding is done, great companies will have the majority of great employees, which will allow them to bury their competitors.

Author Bio
David Russo is Principal and CEO of Eno River Associates, Inc, a consulting practice that helps executive teams build high-performing organizations by developing win-win relationships with the workforce. Russo is perhaps best known as the architect of the famously engaged culture that has made SAS Institute the most successful privately held software company in the world. In the 19 years he was the Vice President for HR of SAS, and since, that company’s extraordinary culture attracts accolades from even such places as CBS’ 60 Minutes. Even today, with all of Russo’s original programs and philosophies still very much in place at SAS, this “great place” achieved the coveted Number 1 spot on Fortune’s annual list of Best companies to Work For.