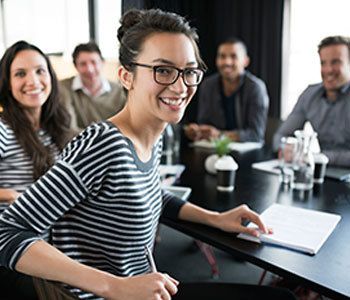 With millions of large-company employees pounding the pavement after recession-driven layoffs, small businesses have a recruitment opportunity that few have ever experienced to attract top talent. If you're such an employer, grabbing big-time corporate talent or overqualified candidates can present opportunities that transcend the seat-of-the-pants approach that characterizes many small companies.

Judiciously chosen big-company executives can also be critical to the growth of smaller companies. "We have two main practice areas, finance and tech," says Richard Dukas, CEO of Dukas Public Relations, a 21-person firm. "I want to grow into other verticals like healthcare energy and consumer. To start those, I'll go for folks from larger firms."

But rather than either jumping at the chance to hire corporate talent or rejecting it out of hand as too risky, it makes sense to carefully examine the pros and cons and forge a recruitment strategy that will help your business to succeed.

Hiring Employees from Large Companies
Among their valuable assets, executives and other professionals who have been with large companies often bring with them valuable connections — to customers, vendors, business partners and others in their profession.

Big-company professionals can also work the kinks out of systems, whether it's on your factory floor or in the realm of corporate governance. "Often, large-company people have deep knowledge of processes," says Duncan Mathison, a consultant and coauthor of Unlock the Hidden Job Market. "This can be a real asset to a smaller company whose lack of process is killing them."

And because they often come with broad and deep experience from the corporate world, these employees often require less mentoring and training. They're able to hit the ground running — as long as they don't stumble on the laces of their track shoes.

Interviewing Large-Company Candidates
Some corporate expatriates come with biases that should make the small employer wary. "We need to see in these people an entrepreneurial side," say Dean Tozer, a senior vice president at Advanced BioHealing, a biotechnology company with about 185 employees. Former employees of big companies may come with feelings of entitlement that won't go over well in a startup environment.

Those sort of biases can become apparent when interviewing candidates. "In the interview I will bring up that we have a different culture and people tend to do a lot of their own stuff," says Dukas. "People come in early and stay late, make their own copies and get their own coffee."

Large-company refugees may also feel like they're taking a cold shower when they learn about your company's limited resources. "You need to calibrate expectations about budgets," says Mathison. "So ask the candidate, 'What would be the operational budget for project X?' The smart candidate will ask what there is to work with, and go from there."

For small employers, the most common issues with large-company employees are that they aren't hands-on enough, lack a sense of urgency and spend too much time on analysis and not enough on execution, says Mathison.

If you're like most employers, you expect all your workers to be willing to pitch in wherever and whenever you need them to. Employees used to working within the narrow confines of a rigid job description may rebel. "It's not going to work if someone says 'That's not my job,' " says Tozer.

Salary Negotiations
Of course, pay is often an issue for workers making the transition from a publicly traded behemoth to a small concern. "If there's a huge pay disparity, common sense goes against making a hire," says Joel Capperella, a vice president with staffing firm Yoh.

Be warned: You may not be able to take at face value the candidate's insistence that she's comfortable with taking a cut from her large-company compensation when making a job offer.

One way to judge understanding of your position on pay is to ask the candidate an open-ended question. "I ask them, "what kind of compensation do you need?' " says Dukas. "If they tell me what they used to make, that's a problem. People have to be willing to accept lower compensation to start."

Finally, for the future welfare of your business, you've got to consider this: Will that former employee of a major corporation really stick with your small company once the economy is clearly on a positive trajectory? If you do a good enough job of keeping them focused on the career opportunity throughout their tenure at your firm, the answer can be yes.

How to Sell the Small-Company Opportunity
Once you settle on a corporate migrant who is worthy of a job offer, you've still got to sell them on your company — which comes down to good company branding.

Describe for the candidate how working at your firm can provide the gratification of seeing how their everyday efforts affect the fortunes of the organization and all its employees.

"Small companies offer professionals incredible autonomy and broad influence," says Capperella. "A job with a small company can be a launching pad for exercising skills they haven't used in a while."