American consumers are the most confident since 2007 On Tuesday, September 27 the Conference Board Consumer Confidence Index was released based on data collected through September 15. The headline number of 104.1 was an increase from the final reading of 101.8 for August, an upward revision from 101.1. This is the highest since August 2007 and reflects more optimism about the economy since the summer of 2007. Economists expected the Consumer Confidence Index to hit 99.0 in September.

"Consumer confidence increased in September for a second consecutive month and is now at its highest level since the recession," said Lynn Franco, Director of Economic Indicators at The Conference Board. "Consumers’ assessment of present-day conditions improved, primarily the result of a more positive view of the labor market. Looking ahead, consumers are more upbeat about the short-term employment outlook, but somewhat neutral about business conditions and income prospects. Overall, consumers continue to rate current conditions favorably and foresee moderate economic expansion in the months ahead." 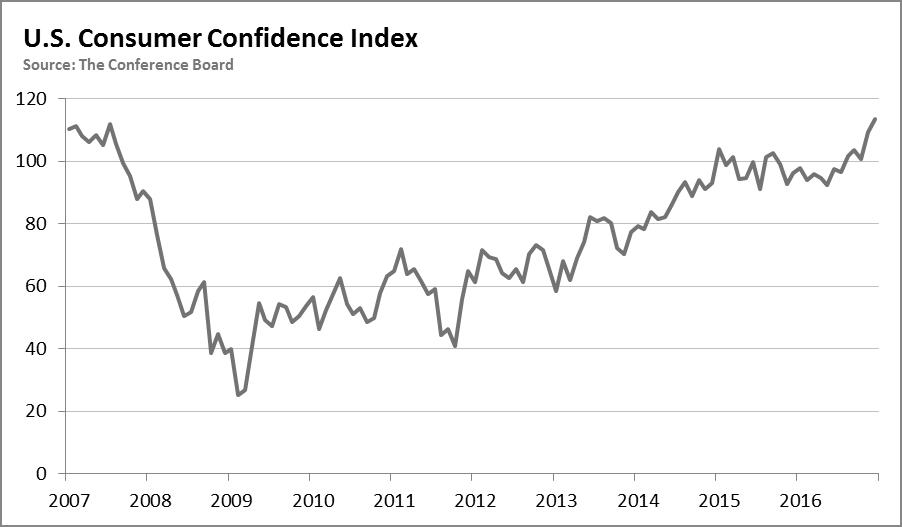 A larger share, 27.9 percent of those surveyed, felt that jobs were plentiful in September, up from 26.8 percent in the prior month. Those claiming jobs were "hard to get" declined to 21.6 percent, from 22.8 percent, The Conference Board said.

The improved outlook reflects a healthier job market. The unemployment rate is 4.9%, less than half its peak of 10% during the recession. Millions of people have found jobs in the past several years and consumers are more upbeat about employment conditions.

Consumer confidence for October 2016 was released on Tuesday, October 25, 2016. For the latest trend view the United States Consumer Confidence updated each month.